Kids and fans alike can imagine the biggest battles and missions in the Star Wars saga with figures from Star Wars The Black Series! With exquisite features and decoration, this series embodies the quality and realism that Star Wars devotees love.

Drawn from many homeworlds and species, Rebel troopers were the Alliance’s front-line soldiers in the war against the Empire. They defended the Alliance’s leaders on countless worlds and during many operations, changing uniforms and tactics to meet each challenge.

This 6-inch-scale Rebel Fleet Trooper figure is carefully detailed to look like the character from Solo: A Star Wars Story. Figure features premium detail and 20 points of articulation. 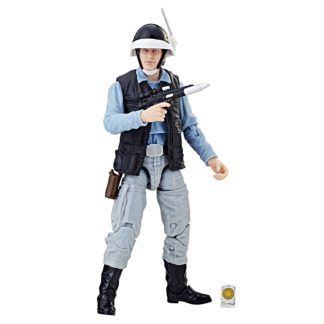