The siege is over, but the War for Cybertron has just begun. The Autobots and Decepticons have left Cybertron, but their battle rages on as they hurtle through space in pursuit of the Allspark. With unforeseen dangers lurking ahead and the Decepticons closing in from behind, the only way out for the Autobots is to find a way through. Both sides must navigate the perils of space and instantly adapt to battle anywhere in the cosmos.

With the highly advanced A.I.R. (Adaptable Interconnection Retrofitter) Locks system, the fighters don’t head to the battlefield — they become it. Bots capable of converting into Modular Battle Stations can A.I.R.-Lock together in custom configurations to fit the needs of battle.

As the battle rages through space, success depends on who can best adapt to the battlefield beyond. But it’s not just the battlefield that commands adaptability. Allegiances can shift just as rapidly, with a new Mercenary faction introduced into the Earthrise world alongside the Autobots and Decepticons.

Some joints are incredibly stiff (head), while others are too loose (right knee).
The action figure is well-designed and beautifully painted, yet quality control is not perfect.

Easy to use, well packaged. Present for young family member.

It was a gift but I do know it was exactly what the recipient (a life long Transformers fan) hoped it would be and he was delighted.

Easy to transform and pose, I could only wish the rest of the Earth rise cybertronians were available right now.

Bot model could be better, shoulder gun needed to be bigger

Great toy& box art but has lost the charm of the 80s products with no Bio description/tech specs of the character.

Love this figure. Nice addition to my collection.

Wanted to add to my transformers collection 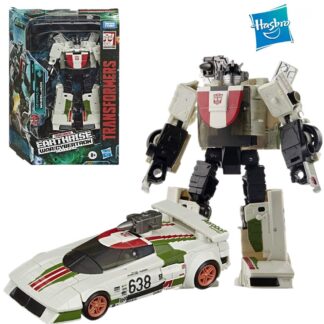