A KOTOBUKIYA Japanese import! Kotobukiya’s hit line of Marvel Comics Avengers ARTFX+ Statues paved the way for the next incredible comic-based series in this great scale, the X-Men of Marvel Now! In 2012 the comic book company relaunched several titles, shifting some characters into different books and updating some for a modern audience. More than anything, it provided a perfect jumping on point for new readers. Now the characters are brought to life as never before based on concept artwork by superstar artist Adi Granov, who was also responsible for the Avengers series. Joining previously released Cyclops, Emma Frost, Magneto, and Magik is the agile and brilliant BEAST!

One of the original five X-Men introduced all the way back in 1963, Henry “Hank” McCoy was a highly intelligent young man whose mutant nature manifested as oversized limbs with fearsome strength. Nicknamed the “Beast,” McCoy struggled with his looks and eventually underwent further mutations that gave him blue fur and a bestial appearance. Despite his issues the mutant has always been a champion of his kind, working with many of the “X” teams over the years in addition to other heroic groups like the Avengers. Standing alongside his X-Men compatriots, Beast looks better than ever with an incredible sculpt that really brings to life his inhuman exterior. Hank is posed in a low crouch, resting on the knuckles of one hand while the other is held to the side with claws ready to strike. The mutant’s face reveals his determination to fight against evil with a heavy scowl and bared teeth. Covered in intricately sculpted fur, the X-Man is blue all over and wears black shorts for modesty.

Sculpted by the same master artist who did the Marvel Now! Avengers series, Junnosuke Abe, Beast is just over 5 inches tall (in the ARTFX+ 1/10th scale) in his crouched position, and magnets in his feet provide perfect stability on his included display base. The blue Beast looks great on his own and is a fantastic addition to your Marvel Now X-Men collection! 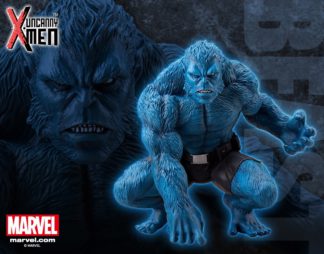