The Star Wars saga captured the hearts of millions with iconic characters, impressive vehicles, and a galaxy of stories that has passed the test of time again and again. Commemorate the first 50 years of Lucasfilm with figures from the Black Series inspired by Star Wars books and comics, featuring premium deco and design! (Each sold separately. Subject to availability.)

Jaxxon is a 6-foot tall, green-furred, Lepi and captain of the Rabbit’s Foot. Known for his wisecracks and karate kicks, Jaxxon has helped Han Solo and Chewbacca out on more than one occasion
Commemorate the first 50 years of Lucasfilm with figures inspired by Star Wars books and comics (Each sold separately. Subject to availability)
This Star Wars The Black Series action figure comes with 2 entertainment-inspired accessories that make great additions to any Star Wars collection
Star Wars fans and collectors can display this highly poseable, fully articulated figure, featuring premium deco, in their action figure and vehicle collection
Look for movie- and entertainment-inspired Star Wars The Black Series figures to build a Star Wars Galaxy (Each sold separately. Subject to availability) 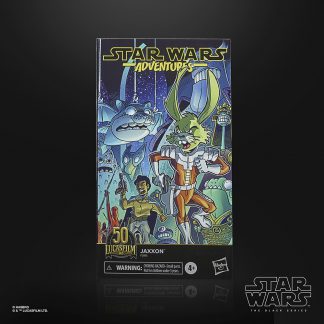