Inspired by the character’s appearance in the Beast Wars animated series comes this special edition Transmutate figure! Transmutate was once a Maximal protoform, but after taking heavy damage to her stasis pod she was left warped and unable to convert. She has an innocent nature and unassuming form, but when threatened, she unleashes her immensely destructive super-sonic scream!

Transmutate was originally released as a build-a-figure in 2006. Now, she’s available as one whole figure, paying homage to the original with her ability to break apart into pieces.

great item at a great price

Loosely based upon the character of the same name making use of another figure mold in the kingdom line he transforms into a dinosaur skeleton and he can also split up into weapons that can be equipped to other figures with 5ml ports on their bodies!

I was a fan of the character so I was pleased to been able to receive it. 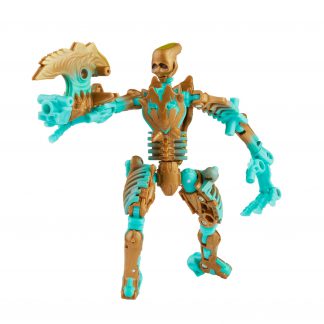