This Studio Series 87 Deluxe Class Transformers: Dark of the Moon -inspired Bumblebee figure converts from robot to licensed Camaro mode in 39 steps. Remove backdrop to showcase Bumblebee in the Battle of Chicago scene. In the Battle of Chicago scene from Transformers: Dark of the Moon, a well-timed distraction allows Bumblebee to escape execution at the hands of Soundwave. Pose the figure out with the included blaster accessory and imagine re-creating this classic movie moment!

Transformers and all related characters are trademarks of Hasbro.
CHEVROLET, the BOWTIE logo, CORVETTE and the CORVETTE logo, and CAMARO, are registered trademarks of General Motors, LLC.

Ages 8 and up
Warning: Choking Hazard — Small parts. Not for children under 3 years. 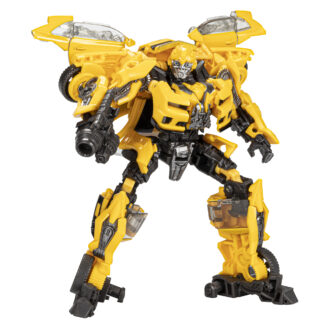