WWE Motion-Activated Universal Championship comes with over 20 match sounds and motion-detected response
Deluxe, interactive trophy item features authentic styling, sleek metallic medallions, a leather-like belt and a one-time adjustable feature to fit around the waist of any child eight years or older
Two button-activated modes are featured: Crowd Mode activates WWE Universe cheers and chants; and Match Mode triggers punching and kicking sounds based on movement
Wear the championship and lie on your back to hear a referee 1-2-3 count occur simulating a real WWE match! During the count, you have a chance to “kick out” during the count (stand up after a 2-count) to let the action continue
When the championship is placed on its face, it can count and announce a winner to simulate a WWE Superstar performing a “pin” to win the match. If you “win” the match, the announcer will make it official by exclaiming you have won! 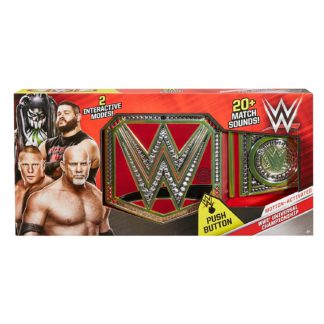