This item has a release estimate of September 2023 subject to delays.

DUE AUGUST / SEPTEMBER 2023 – Estimated and subject to any wholesaler or manufacturer delays ) Orders with multiple pre-orders will only ship when everything is in stock and mixing can cause delays in dispatch depending on staggered release dates and delays by the manufacturer. )

FWAK! The World’s Greatest Detective is after criminal mastermind and fallen District Attorney, Harvey Dent, also known as Two-Face. The odds are two to one but in whose favor?

Batman dons a classic Golden Age-inspired Bat Suit including an integrated posing wire in his cape, bat insignia, and utility belt. Five head portraits are included, as well as a mask that he can hold in his hands or over his shoulders. The Caped Crusader comes equipped with 3D punch FX that attach to his fists, multiple Batarangs in varying styles, two-way Bat-radio belt buckle that attaches to his belt, and a Rebreather breathing apparatus.

Two-Face AKA Harvey Dent wears a suit inspired by his first appearance in the Detective Comics. His outfit is constructed of two different suits stitched right down the middle with a matching bow tie, gloves, and different colored shoes to compliment his twisted duality. He comes with two chemically disfigured head portraits as well as a pre-disfigured Harry Dent portrait. Two Face is equipped with multiple switchblades, multiple two-sided coins and flipping FX, and an old valise containing two bundles of dynamite and a timer.

FREE DOMESTIC AND INTERNATIONAL POSTAGE IS NO LONGER AVAILABLE IF USING THE DEPOSIT OPTION – PLEASE ONLY PLACE A DEPOSIT IF YOU HAVE A PAYPAL ACCOUNT. INVOICES WILL BE SENT TO THE EMAIL ADDRESS USED TO PLACE YOUR DEPOSIT. A FULL REFUND IS AVAILABLE AT ANYTIME UP UNTIL YOU RECEIVE THE INVOICE FOR YOUR BALANCE SHOULD YOU WISH TO CANCEL. FULL PAYMENT WILL BE REQUIRED WITHIN 4-7 DAYS OF INVOICE RECEIPT 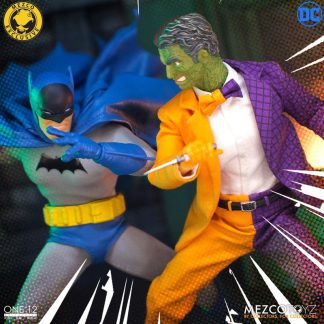