STORMTROOPER JEDHA PATROL: The Empire occupies Jedha with Stormtroopers, who are elite shock troops loyal to the Empire. A battle between Imperial forces and scattered Rebels carries on in the streets
ROGUE ONE: A STAR WARS STORY: Fans and collectors can imagine scenes from the Star Wars Galaxy with this premium Stormtrooper Jedha Patrol toy, inspired by the Rogue One: A Star Wars Story movie
MOVIE-BASED CHARACTER-INSPIRED ACCESSORY: This Star Wars The Black Series action figure comes with 1 entertainment-inspired accessory that makes a great addition to any Star Wars collection
LOOK FOR OTHER FIGURES FROM A GALAXY FAR, FAR AWAY: Look for movie- and entertainment-inspired Star Wars The Black Series figures to build a Star Wars galaxy (Each sold separately. Subject to availability)
PREMIUM ARTICULATION AND DETAILING: Star Wars fans and collectors can display this fully articulated figure featuring poseable head, arms, and legs, as well as premium deco, in their action figure and vehicle collection 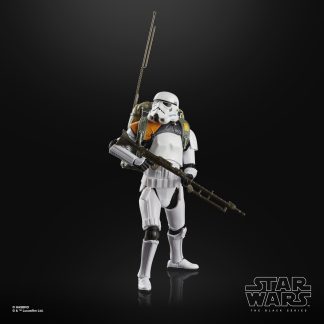