4-LOM AND ZUCKUSS: When Kenner first produced the 4-LOM and Zuckuss figures, the names somehow got reversed. In this Star Wars 2-pack, the original packaging has been recreated — switched names and all
STAR WARS: THE EMPIRE STRIKES BACK: Fans and collectors can imagine scenes from the Star Wars Galaxy with these premium 4-LOM and Zuckuss toys, inspired by the Star Wars: The Empire Strikes Back movie
MOVIE BASED CHARACTER-INSPIRED ACCESSORIES: These Star Wars The Black Series action figures come with 2 4-LOM and Zuckuss-inspired accessories that make a great addition to any Star Wars collection
PREMIUM ARTICULATION AND DETAILING: Star Wars fans and collectors can display these highly poseable (4 fully articulated limbs) figures, featuring premium deco, in their Star Wars collections
LOOK FOR OTHER FIGURES FROM A GALAXY FAR, FAR AWAY: Look for movie- and entertainment-inspired Star Wars The Black Series figures to build a Star Wars galaxy (Each sold separately. Subject to availability)

Originally a protocol droid, logic glitches allowed 4-LOM to become a bounty hunter. Zuckuss was a mercenary that heeded the call to locate the Millennium Falcon and its fugitive crew!

The 6-inch scale Black Series figures are carefully detailed to look like the characters from Star Wars: The Empire Strikes Back, featuring premium detail and multiple points of articulation. 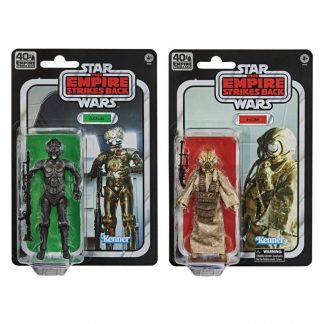