Ryu Oyama has redesigned and made the original sculpt for the figure of Ultraman Belial who is the arch-enemy of Ultraman Zero, the son of Ultraseven. Belial was once an Ultra Warrior of the Land of Light but has fallen to evil due to his desire for more power. The concept of Oyama’s redesigned Belial for this project is that “it is evil, but still an Ultraman.” Thus, Oyama has intentionally avoided making the details of the design overly creature-like in order to keep the aspect of Ultra Warriors being “a god-like entity which is beyond human understanding.”

The threezeroX Ryu Oyama Ultraman Belial collectible figure stands approximately 13.5 inches tall and is fully articulated with over 87 points of articulation including the finger joints of the Kaiser Belial hands. The head and hands are interchangeable between 2 alternative designs; one based on Belial as its first appearance in the movie Mega Monster Battle Ultra Galaxy: The Movie (2009), and the second, based on Kaiser Belial from the movie Ultraman Zero: The Revenge of Belial (2010). 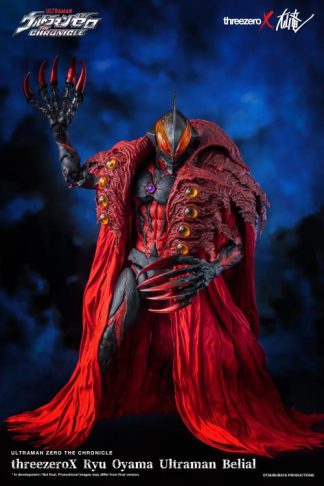