IMPORT – Box collectors please note there may be Euro or USA text to the rear of the packaging – The siege is over, but the War for Cybertron has just begun. The Autobots and Decepticons have left Cybertron, but their battle rages on as they hurtle through space in pursuit of the Allspark. With unforeseen dangers lurking ahead and the Decepticons closing in from behind, the only way out for the Autobots is to find a way through. Both sides must navigate the perils of space and instantly adapt to battle anywhere in the cosmos.

With the highly advanced A.I.R. (Adaptable Interconnection Retrofitter) Locks system, the fighters don’t head to the battlefield — they become it. Bots capable of converting into Modular Battle Stations can A.I.R.-Lock together in custom configurations to fit the needs of battle.

As the battle rages through space, success depends on who can best adapt to the battlefield beyond. But it’s not just the battlefield that commands adaptability. Allegiances can shift just as rapidly, with a new Mercenary faction introduced into the Earthrise world alongside the Autobots and Decepticons.

Great figure. Better than I was expecting!

its a masterpeice figure at off the peg prices pick it up if you can, and if you see two, leave one for the next collector

The head needs replacing, glad there's a 3rd party for it.

Great toy& box art but has lost the charm of the 80s products with no Bio description/tech specs of the character.

I loved this figure and it was exactly the quality I wanted.

When was the last time we got a Cliffjumper figure that wasn't just a Bumblebee redeco? About time CJ got a mold of his own and this doesn't disappoint. The fact the BFG breaks down and all parts fit on the alt mode is just icing on the cake. Slight parts forming, but doesn't distract from what is a fantastic figure.

Love this figure. Nice addition to my collection.

The WFC range has been remarkable. I got this for my son, but I’ve brought a number of Siege bots for myself. They look awesome and have great playability.

Sceptical, but won over! Excellent figure.

It's small for a deluxe but it's a fantastic figure, very good articulation for such small features 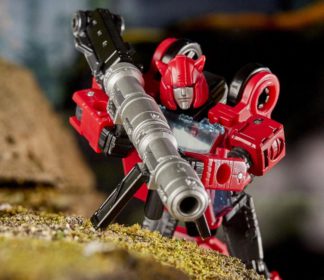