Katana is a sword-wielding Japanese super-hero with magical weaponry. Her blade is the Soultaker Sword, a relic that steals the essence of those it slays and stores them inside.

It was taken in a duel with the man who killed her family, Takeo Yamashiro. Batman eventually recruited her to become a member of his black-ops team the Outsiders during a mission in Markovia.

She has also been a member of the Birds of Prey. Katana was created by Mike W. Barr and Jim Aparo, first appearing in Batman and the Outsiders #1. (1983)

With her iconic mask and beloved sword Soultaker by her side, Katana is ready to strike down her enemy. Katana looks amazing in her glistering black armour and red boots. 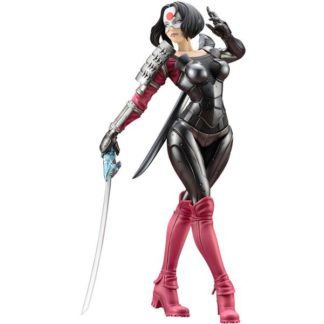