In the Avalon Hill HeroQuest Game System Tabletop Board Game, heroes work together to complete epic quests, find treasures and defeat the forces of evil. This semi-cooperative board game has one player taking on the role of Zargon, the Game Master, while 4 mythical heroes – Barbarian, Dwarf, Elf, and Wizard–team up in their quest for adventure in a maze of monsters and eerie dark dungeons. Players can immerse themselves in the fantasy with the stunning artwork, and 65+ detailed miniatures. The game comes with 14 quests, and has limitless replayability because players can also build their own quests and create their own stories. Gather friends together for an exciting night of tabletop gameplay in an epic battle of good and evil. The game is for 2-5 players, ages 14 and up.

A 'Good' Resurrection of a cult classic.

Mostly, the components match the historic versions, expect the card quality is superior. The rules are the same and the quests faithful.

But, the miniatures are modernised in concept, which detracts from the quality of the original concept. Similar can be said for some of the art.

The major problem is the price tag (not Kapow's fault). Hasbro/Avalon Hill are asking for a price equivalent to Nemesis (by Awakened Realms) for a less in the box.

I was going to pass on the HeroQuest update as a big part of the original game was the Les Edwards art etc. But having a complete set with less fragile pieces and legally distinct from Games Workshop (who've gone out of their way to alienate fans in the last year or two by targeting fan videos and content) isn't a bad thing. 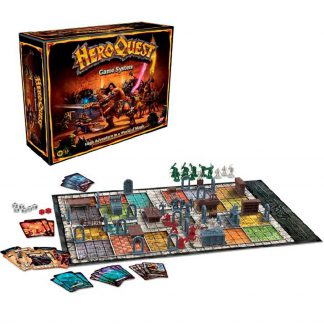