This item has a release estimate of June 2022 subject to delays.

DUE MID 2022 – ( Estimated and subject to any wholesaler or manufacturer delays ) Orders with multiple pre-orders will only ship when everything is in stock and mixing can cause delays in dispatch depending on staggered release dates and delays by the manufacturer. )

In the barren and inhospitable terrain of a medieval world from another dimension called the Realm, six young warriors raise their mystical weapons to face the most fearsome and dangerous creature in this universe. Their leader, Hank the ranger, prepares to fire one of his energy arrows. Beside him is Sheila, the thief, who activates her power of invisibility with her cloak, represented in a semi-translucent figure. The not so brave Eric, the cavalier, protects himself with his shield that repels magic. The agile acrobat Diana leaps up with her staff and dodges the freezing breath fired by one of the heads of the monstrous beast. Presto, the magician, removes a spell from his magic hat. Facing the enemy is the impetuous Bobby, the little barbarian, alongside his unicorn pet called Uni, who strikes the ground with his club, thus opening a lava rift against his opponent.

The colossal figure, who is the protagonist of this work, faces the heroic group, and he is feared even by the powerful and evil sorcerer known as Venger. This centerpiece is the supreme dragon Tiamat, derived from a dragon goddess in Mesopotamian mythology. The mighty monster has five heads with different colors and powers. The main head is red, this being the only one that speaks, and it also expels fire flames. On the right is the white head, which fires freezing rays, and the green head, whose power is a breath of poison gas. On the left side is the black head, which throws acid, and the blue head, capable of emitting rays. With this stunning scenario, Iron Studios proudly presents its magnificent statue \”Tiamat Battle Demi Art Scale 1/20 – Dungeons and Dragons – Iron Studios\”, representing the epic confrontation of the beloved protagonists of the animated series Dungeons & Dragons against their most powerful enemy. It\’s the ultimate piece for animation lovers!!

Based on the classic role-playing game of the same name, the animated series called Dungeons & Dragons was a big hit among the 1980s animations. The show features the adventures of six young friends who, upon getting on a roller coaster at an amusement park, end up crossing a portal that takes them to another world. Dressed in clothes that characterize the skills they have acquired in this different world, they received, from an old dwarf known as Dungeon Master, powerful magical weapons, living great adventures, always seeking the long-awaited return to Earth.

FREE POSTAGE IS NO LONGER AVAILABLE IF THE DEPOSIT OPTION IS USED – PLEASE ONLY PLACE A DEPOSIT IF YOU HAVE A PAYPAL ACCOUNT. INVOICES WILL BE SENT TO THE EMAIL ADDRESS USED TO PLACE YOUR DEPOSIT. A FULL REFUND IS AVAILABLE AT ANYTIME SHOULD YOU WISH TO CANCEL. FULL PAYMENT WILL BE REQUIRED WITHIN 7 DAYS OF INVOICE RECEIPT 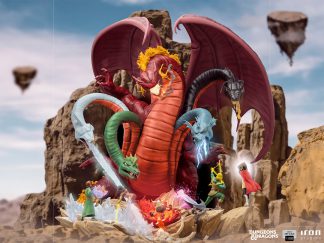