Re-create the biggest battles and missions of the Star Wars saga with these figures from The Black Series! With exquisite features and articulated movement, the figures in this series embody the quality and realism that Star Wars devotees love. This 6-inch-scale Kanan Jarrus figure is carefully detailed to look just like the Jedi hero from Star Wars: Rebels. Kanan Jarrus survived the Emperor’s purge, going underground for years and hiding the truth about who he really was. He was a leader among the Ghost crew, a small group of rebels looking to strike back against the Empire. This figure is crafted to display true-to-story detail and comes with an accurately decorated accessory. Act out favorite battles or create brand new ones! No collection — or adventure — is complete without this Kanan Jarrus figure. Build up an epic collection with all the figures and vehicles from The Black Series. Star Wars products are produced by Hasbro under license from Lucasfilm Ltd. Hasbro and all related terms are trademarks of Hasbro.

Great looking figure, but as i'm a boxed collector I havent had him out the box. 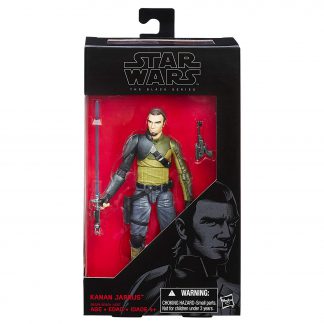