“If Frenzy needed to breathe, war would be his oxygen. He knows no cause, only craves to spread fear and destruction. His efforts are appreciated by other Decepticons. His devotion to warfare makes him hard to deal with on a personal level. Can roll his drums to produce high-pitch grating sound of 200db (decibels). Disorients and disrupts electrical flow in opponent’s circuitry which makes them malfunction. Physically weak. His manic attack can be countered with cool logic.”

“Laserbeak takes pleasure in hunting his prey – usually the straggling survivors of a battle. Noticeably not brave. Will run for safety if threatened. Flies at speeds up to 250 mph. Uses two independently targetable laser cannons with extreme precision to get information from captives. Shortage of ruby crystals that powers the lasers can panic his systems into shutting down.”

Decepticons Frenzy and Laserbeak transform from robot and robotic condor to micro spy cassettes and back again. Their card features their instructions, tech spec, classic artwork and multilingual texts. These figures were an exclusive to Walmart stores in the United States and Canada in 2019. 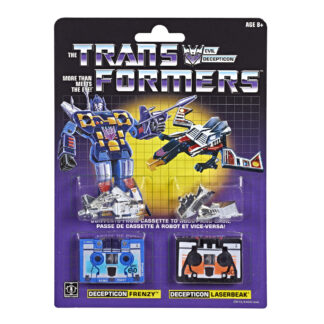 You're viewing: Transformers G1 Reissue Frenzy and Laserbeak NOT MINT £29.95
Add to basket