Now you can catch America’s favorite green teens in their first live-action blockbuster film! After wading in apuddle of radioactive waste, these radical reptiles are transformed into New York City’s greatest crime-fighting quartet. Raphael, a skilled sai-wielding ninja,
comes with his signature weapons, alternate bandanaknot, and a slice of pizza. Disguised in a fedora,backpack, and real fabric trench coat, he is able toroam the New York streets at night.

Casey Jones, the masked vigilante, carries a golf bag on his back filled with goodies to bludgeon the Foot Clan including a
cricket and baseball bat, golf club, and hockey sticks…makeshift weapons in his war against crime! Thesehighly detailed figures feature an assortment of swappable hands and movie accurate accessories withover 30 points of articulation for maximum posing 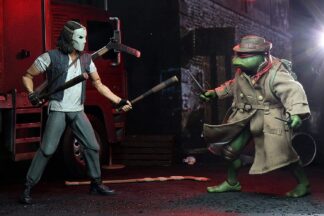